Heteronormativity has too long had the world in its grips and our mission is to prise open its fingers. Heteronormativity, we suggest, is a hereditary disposition, a set of well-trodden paths leading to tacitly agreed objects and outcomes. The more we uncritically follow these paths that are given to us, the more normalised they become, the more ‘right’ they seem, and the more other possible paths become unimaginable.

KINQ needs YOU to make visible and denaturalise the insidious routes that heteronormativity has us take, and to open up spaces for experimentation, for queer curation!

The KINQ Manifesto is the ongoing product of all its agents. As such, it is necessarily incomplete, heterogeneous, polyvocal: it works against conventional notions of authority and ownership, of ‘the manifesto’. The KINQ Manifesto may well be what Derrida (2006) describes as a ‘messianicity without messianism’: a call, a promise of an independent future for what is (and will always be) to come.

Sex, says Jennifer Tyburczy (2016), is more than a relationship between bodies. Sex is ‘a diverse, dynamic, interactive, and interdependent social relation cultivated by the ways in  which bodies, spaces, and objects interrelate’ (2016:1). In other words, far from being natural, sex should be thought of as choreographed by convention: bodies/body-subjects are oriented (invited, coerced, positioned, and take up positions) around, towards and away from particular objects’ (2016:1). These ‘objects’ can be physical (bathrooms, cars, high heels, body hair, footballs), but also, as Sara Ahmed reminds us ‘objects of thought, feeling, and judgement, as well as objects in the sense of aims, aspirations, and objectives’ (2006:56).

As Jennifer Tyburczy’s landmark text Sex Museums clearly illustrates, all museums shape relations between bodies, spaces, and objects. They do so by reproducing, and sometimes subverting, conventional ways of seeing, knowing, and being.

Think about the ways in which museums literally orient visitors through spaces. Not only do they map out the path, they construct particular ways of moving as im/proper. Floors are not painted with running tracks, there are no hurdles, no high jumps, no interactive dance floors, no glory holes – at least, not in the museums that we’ve visited!. Visitors are not encouraged to run, jump, or dance, in fact they are actively discouraged from it. As Dewdney, Dibosa and Walsh write of Tate Britain, ‘’social reserve, silence, and restrained body movement is still the tacit mode of observance’ (2013:10). The exceptions are spaces – usually for children –  that are consciously designed to encourage these kinds of activities, but only within clearly designated zones.

Think about the kinds of relationships museums establish between visitors and the objects on display. Most employ a ‘look, but don’t touch’ ethos, (a message conveyed in signage and also through the use of cordons and glass cases) which constructs one way of interacting with, or relating to objects as correct, and others as ‘off limits’.

Think about the ways in which stories are told both physically through the placement of objects in relation to others, textually in labels and wall text, and verbally through audio guides, tours, and so on. These configure  particular kinds of relationships between space, bodies and objects as natural or ‘normal’ (family structures, typologies of being, social hierarchies) such that they appear natural, become taken-for-granted, and thus not subject to critical engagement.

While to some museum and GLAM sector practitioners this claim may seem surprising, to most queer-identified people it probably requires little or no explaining. But we want this claim to be a reminder that if sex refers to the relationship between bodies, objects and spaces, then ‘sexual normalcy’ is always also a matter of gender, class, race, dis/ability, and so on. It is always already about hierarchical relations of power. It is always about what has become invisible or seemingly ‘natural’ and uncontestable. If, given the this, we think of queer curatorship as imperative, this imperative must necessarily be grounded, as Kama La Mackerel, Syrus marcus Ware, Lacie Burning and others have argued, in intersectionality (cited in Barbu, 2018).

Depictions, representations, and interpretations of heterosexuality and cisgender are ubiquitous in museums. As such, their status as natural, as normal, is reaffirmed. ‘Queer’ identities, relations, knowledges, however, are largely absent from museum interpretation: they are rarely displayed as paths to follow. Queer ways of being are thus constituted as deviations from the norm. While such exclusions may not explicitly prohibit queer sex they function as what Sara Ahmed, in her wonderful work of KINQ scholarship, Queer Phenomenology, refers to as ‘straightening devices’ that keep things in line, in part by ‘holding things in place’ (2006:66). These devices (which include absence) frame queer sex as a failure to follow the straight and narrow, as off-line, deviant, perverted and perverting. As Barbara Kirshenblatt-Gimblett reminds us, ‘display not only shows and speaks, it does’ (cited in Tyburczy, 2016:2), and what heteronormative display does is to define and reaffirm sexual normalcy through the exclusion of that which it constitutes as ‘other’.

5. KINQ renounces the straight and narrow.

LGBTQ lives are no longer wholly absent in museums, in fact, they are increasingly included. However, inclusion in the museum often means inclusion within the parameters of sexual normalcy. One-off exhibitions, for example, are often characterised by a focus on histories, rights, and political struggles, that employ a progressivist narrative culminating in ‘victories’ such as same-sex marriage. This highlighting of lives that have been excluded from mainstream narratives and institutions undoubtedly has value but at the same time it can tend to reproduce deeply held assumptions that are, for many queer-identified people, problematic. These include the normalising idea that ‘homosexuality’ is an ahistorical, universal, thing-in-itself, rather than an umbrella term for a range of diverse identities and practices that has been constructed, contested, lived and experienced in multiple and complex ways. This assumption, and the associated idea that liberation, equality, visibility, and inclusion in the mainstream are the ultimate goals, constitute, what Lisa Duggan (2004) calls homonormativity. Homonormativity Duggan writes, is  ‘A politics that does not contest dominant heteronormative assumptions and institutions, but upholds and sustains them, while promising the possibility of a demobilized gay constituency and a privatized, depoliticized gay culture anchored in domesticity and consumption’ (Duggan 2004:50).

Homonormativity, one might argue, then, follows the path of heteronormativity, and in doing so, reinforces its status as the right and proper way. At the same time, it constructs those who won’t or can’t follow the straight and narrow, as perverted. So whilst married, monogamous, white, middle-class, able-bodied ‘respectable’, gay and lesbian couples may be appearing more and more in museums, polyamory, kink, gender queerness, communal living, intergenerational relations, and so on, remain conspicuous in their absence.

6. KINQ sings the praises and critique the limits of ‘queer curatorship’.

Jennifer Tyburczy articulates queer curatorship as a mode of display that puts non-normative principles into practice. Queer curatorship is, as she describes it, at once a critical engagement with the ways in which museums place objects in normative sexual relationships through repetition of familiar arrangements, juxtapositions, and chronologies, and a method for experimenting with object arrangements toward the development of alternative relationships. Queer curatorship, as Videofag’s Jordan Tannahill and Willian Ellis demonstrate, may well have less to do with LGBTQ visibility than with ‘examining gentrification, colonization, patriarchy, immigration policy, … sex work, systematic racism and so on’ (cited in Barbu, 2018). In short, then, there is no blue-print for queer curatorship, nor can there be, not least because museums are diverse and situated, as are their audiences, and ways of knowing, being and doing are complex, heterogeneous and multifaceted. Queer curatorship – we hope – is not the basis on which to found hierarchies of queerness, but rather, a heterogeneous, open-ended process of creative critical praxis to which we can all contribute and from which we can all learn.

Derrida, Jacques (2006) Spectres of Marx: The State of Debt, the Work of Mourning and the New International, London: Routledge. 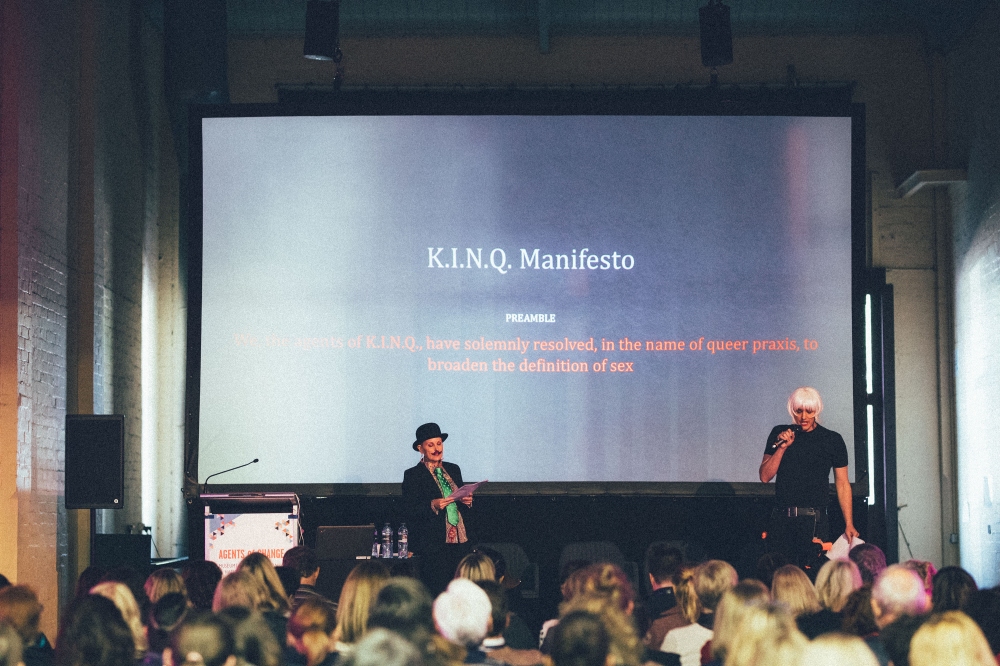 Craig Middleton and Nikki Sullivan are curators, researchers, and activists working and living in Australia.